Refugee Protection Division, Immigration and Refugee Board of Canada

The Minister sought to vacate the refugee protection granted to a citizen of Bulgaria, alleging that he had voluntarily re-availed himself of his country’s protection by applying for a passport and returning to Bulgaria. They relied on section 108(1)(a) of the Immigration and Refugee Protection Act. Based on the specific facts of this case, we argued that our client’s return to Bulgaria did not constitute re-availment because our client returned for family-related obligation, and remained in hiding. The presumption of re-availment was successfully rebutted. The RPD Panel agreed that our client had not demonstrated an intention to re-avail himself of protection, pointing to the UNHCR Handbook for guiding principles.

An important takeaway from this case is the Federal Court’s review of the treatment of new evidence on a de novo appeal, stating: “in the context of a de novo appeal, an Applicant cannot be faulted by the IAD for attempting to answer the concerns previously identified by a visa officer. Indeed, it is the purpose of such hearing to allow for the adduction of new evidence to answer the visa officer’s concerns” (para 9).

In this case, the Applicant challenged the reasonableness of a decision of the Immigration Appeal Division (IAD) where the IAD upheld a visa officer’s refusal of the sponsorship of his wife. The Applicant travelled from Canada to Vietnam to meet his spouse-to-be in 2016, and married her that same year. The visa officer’s refusal was based on his belief that the Appellant had not proven the marriage was genuine and not entered into primarily for immigration purposes. The officer took issue with the how fast the relationship developed, and with the Applicant’s wife’s lack of knowledge of Newmarket, Ontario (where she would be living) and of her husband’s past relationships.

The Federal Court found the IAD decision to be unreasonable primarily because the IAD Member based negative findings against the Applicant on evidence which post-dates the visa officer’s decision. The Federal Court confirmed that the IAD cannot reasonably dismiss evidence simply because it arose after the visa officer’s decision (such as money transfers and evidence of communication). As stated by the Court:

“Cumulatively, these discrepancies between the evidence on record and the blank reasoning to exclude outright any explanation renders the IAD’s decision unreasonable (para 10).”

Further, the IAD’s credibility findings were not transparent or intelligible because it found the couple’s testimonies to be “rehearsed and scripted” but did not provide an explicit credibility analysis.

The Federal Court concluded that had the IAD properly considered the new evidence, including the Applicants’ testimony, the visa officer’s concerns regarding both the genesis of the relationship and the haste of the relationship would have become clearer.

Dennis Stephen by his Litigation Guardian Howard Goodman v. The Minister of Citizenship and Immigration, 2019 FC 1331

This case involved an allegation of incompetent counsel. The Applicant retained an immigration consultant to assist him with his Humanitarian and Compassionate application. The Applicant has a severe speech impediment. The immigration consultant failed to include important information in the H&C application, including the fact that the Applicant was in a common-law relationship in Canada. He also failed to address whether the Applicant faced challenges understanding and answering questions, given his difficulties with daily activities. The Federal Court agreed that previous counsel’s representation was deficient, resulting in a miscarriage of justice.

Successfully argued to reverse a PRRA denial. The PRRA was based on personal threats received by our client from the FARC, a guerilla organization operating in Colombia. In this case, the Officer dismissed new evidence from Colombia because he did not find the documents to be “essentially different from the information previously considered by the RPD” and because they related to the “same risk.” The Federal Court judge agreed with our argument that this analysis of new risk is flawed and concluded that the Officer had “unreasonably failed to engage with the new evidence.”

This case saw the overturning of an H&C refusal. The Applicants are citizens of the Republic of South Africa. We argued that the Officer’s decisions did not meet the standards established by the Supreme Court of Canada in Kanthasamy. The court agreed. First, the best interest of the child analysis was conflicted to the point of being unintelligible. It was not open to the officer to find that the best interest of the grandchild was to remain with his grandparents, but that nevertheless, returning him to South Africa would not compromise his well-being. The Officer also ignored the effect removal would have on the mental health of the adult applicant despite the psychological diagnosis before him.

Than Soe v. Minister of Public Safety and Emergency Preparedness (2018)

Successfully argued to overturn the refusal of our client’s restricted Pre-Removal Risk Assessment [PRRA] application. Our client hijacked a Myanmar airliner in 1999 in order to raise awareness of the plight of the Burmese people suffering under a brutal military dictatorship. Hailed as a hero outside of Burma, our client was identified by the Burmese military as an enemy. He was therefore found to be at risk of persecution by a Canadian PRRA officer in 2007. In 2017, the Minister found he was no longer at risk as the situation in the country had improved. The court quashed this decision on a number of grounds including a failure to consider whether the alleged change in Myanmar was durable. The court agreed that democracy alone does not guarantee state protection because “efforts and promises are not enough […] the quality of the institutions relied on to provide protection must also be considered.”

Successfully argued to overturn the refusal of our clients’ application for permanent residence in Canada. The immigration officer had dismissed their application because he found the applicant to be a danger to the security of Canada. The applicant had once worked for the National Iranian Oil Company and its subsidiaries which, it was alleged, had attempted to acquire components which could be used in the nuclear industry. We argued that the officer had incorrectly relied on “guilt by association” rather than on evidence that our client had made a deliberate contribution to Iran’s weapons program. The court agreed, noting that: “It is difficult to conceive how a person could represent a danger to Canada’s security without evidence that the person had actually done, or was expected to do, something that could be considered a threat to Canadians.” The court awarded costs of $2000.00.

Successfully argued to overturn the decision of an immigration officer who dismissed our client’s application for permanent residence in Canada on humanitarian and compassionate [H&C] grounds. Our clients in this case were citizens of the Czech Republic. The officer wrongly determined that they could return to the United Kingdom. The officer also decided there was insufficient grounds to excuse the principal applicant’s criminal inadmissibility. The court found that the decision was unreasonable because the “whole point” of a humanitarian application is to overcome those very factors that make people inadmissible to Canada. The court also found the family’s status in the United Kingdom to be irrelevant considering the focus of H&C applications, including establishment in Canada.

Successfully argued to overturn a decision of the Refugee Protection Division [RPD] of the Immigration and Refugee Board [IRB] of Canada. Our client was a citizen of Guatemala. He had fled Guatemala to the United States after enduring years of threats from guerilla groups against himself and his family. He lived in the United States for 13 years with no status before coming to Canada seeking protection. The RPD determined that our client’s refugee claim had no credible basis. The court agreed with our arguments that the RPD decision was unreasonable, noting that the RPD’s analysis of our client’s oral testimony was “far too microscopic to support a negative credibility finding.” The RPD decision was quashed.

This case involved an individual’s fundamental right to citizenship. Our client was the Canadian-born child of espionage agents for Russia. We successfully argued that the Federal Court should not have upheld the revocation of his Canadian citizenship by the Registrar of Citizenship. In a 2:1 decision, the Federal Court of Appeal agreed that the provisions of the Citizenship Act cited by the registrar did not apply because the parents acquired no diplomatic type status as covert agents of the Russian government. As such, their children born in Canada acquired Canadian citizenship.

This case is a Second World War citizenship revocation case. For the third time, the Federal Court of Appeal overturned the Trial Division and returned the matter to the Governor in Council [GIC] for redetermination and to apply the complicity criteria as set out by the Supreme Court of Canada.

Read more about the Oberlander case on our news page.

Poulton Law acted for the intervener, Parkdale Community Legal Services in a challenge to the standard used by immigration officers in assessing applications under 25(1) of the Immigration and Refugee Protection Act [IRPA] for permanent residency on humanitarian and compassionate [H&C] grounds. The Supreme Court of Canada [SCC] held that immigration officers were fettering their discretion in applying a rigid standard of undue, unusual or disproportionate to their assessment of hardship. The SCC held that a broader more equitable standard, which incorporated the Chirwa test of the reasonable person and other hardship considerations was the correct approach.

The Supreme Court of Canada [SCC] quashed the decision of the Federal Court of Appeal which held that people smuggling under IRPA could include humanitarian purpose.  Mr. Hernandez had attempted to smuggle his family out of Cuba. He was not paid for this action. He did it for reasons of compassion, yet he had been labelled a people smuggler and denied access to the RPD. The SCC agreed that such an interpretation was inconsistent with international law, the Canadian Charter of Rights and Freedoms, and the purpose of the provision. Since this decision was overturned, he was able to proceed with his claim for refugee protection. 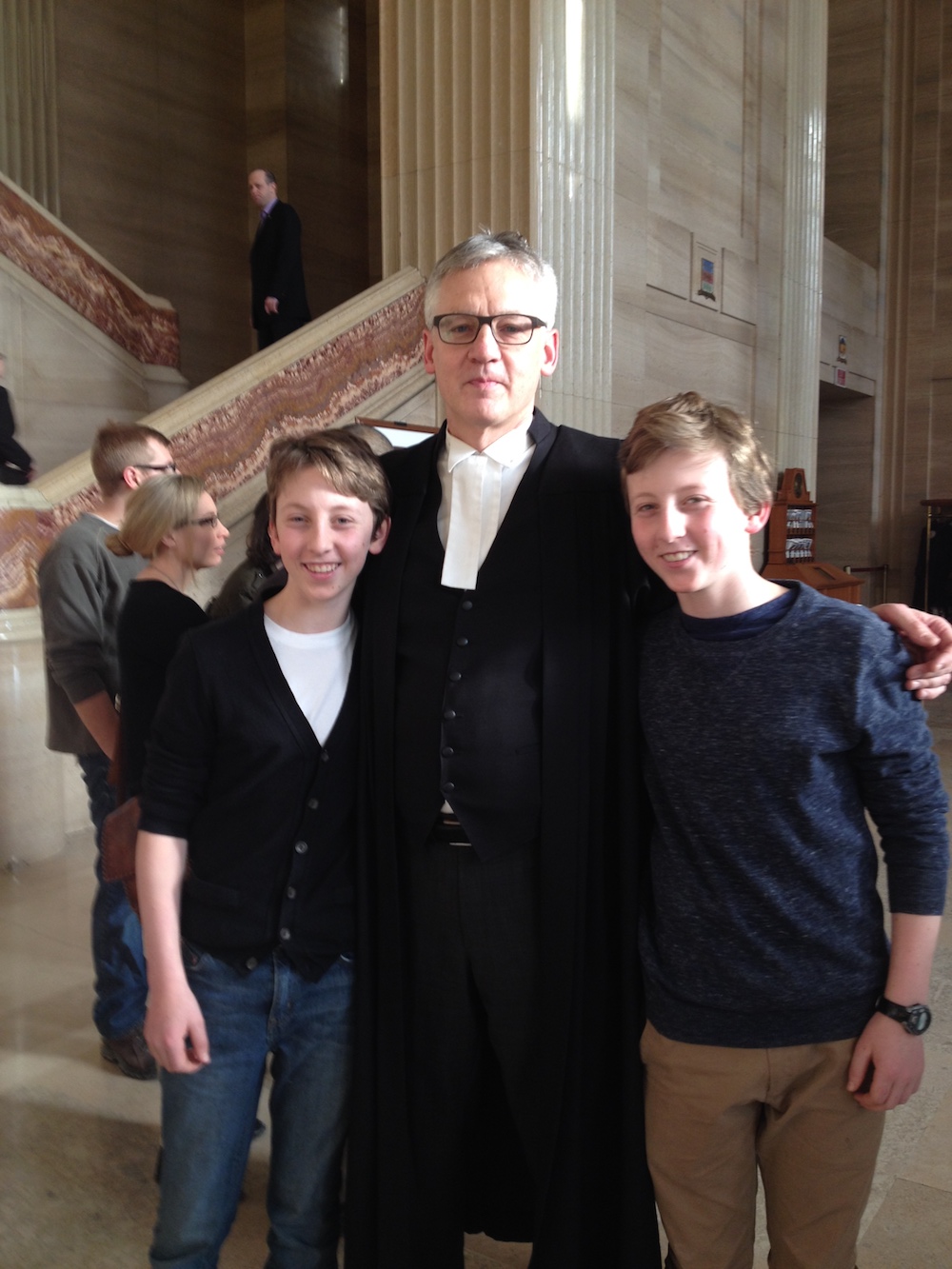 Ronald Poulton, with sons, prior to arguing for the appellant, Jesus Rodriguez Hernandez in B010 & Hernandez  v. Canada (Citizenship and Immigration), 2015 SCC 58.